Spain-India 2020: A joint reflection on our past, present and future

With this publication we deepen the bilateral relationship, identifying its main assets and vectors and offering the keys to its challenges and opportunities | Download the Report

The Spain-India Council Foundation (SICF) has more than 10 years of experience working to deepen and broaden the relationship between both countries. It has consolidated its prominent role as a civil society platform and is constituted by a multisectoral board of trustees, being an example of public-private cooperation that works aligning and complementing its activity with the Public and Economic Diplomacy of the Ministry of Foreign Affairs of Spain.

From that privileged position, we publish the Spain-India Report 2020. It is the result of a joint reflection, in which the main actors that are part of bilateral relations have participated. Its objective is to get to know the state of the Spain-India relationship and contribute to the analysis of how we can increase our cooperation and exchanges.

This report aims to become a reference publication and its purpose is to give way to an even more ambitious, shared, active and constant process of reflection. In his message presenting the project, the Vice-President of Acciona and President of the Foundation, Juan Ignacio Entrecanales, states that "we hope that this project will be of interest to you, receive a response about your impressions and that it fulfills its mission of bringing Spain and India closer together, which is the purpose of the Council Foundation".

The Spain-India Report 2020 is based on three pillars: creating knowledge maps in the main areas of interest; analyzing relationships from a sectoral perspective; and offering ideas and proposals to boost bilateral relations.

More than 475 references and 270 direct sources have been used and contributions have been collected through the following digital instruments: bilingual digital surveys open to the participation of every person interested in Spain-India relations; bilingual digital forms for entities with bilateral impact; and virtual interviews with 80 bilateral actors.

The publication consists of nine sectoral working papers. At the end of each document there is a section with ten proposals aimed at promoting the relationship in their respective sector.

The documents systematize the different sectoral knowledge maps, which include: 70 illustrations, including geographic maps of India and Spain, graphs with the main bilateral data, chronological diagrams or systematic tables; 33 sections called "In Detail", which delve into the main pillars, actors, assets, vectors and success stories of our bilateral relations; and 19 sections called "Cases", that show the work of the main Spanish institutions and entities in their relations with India. 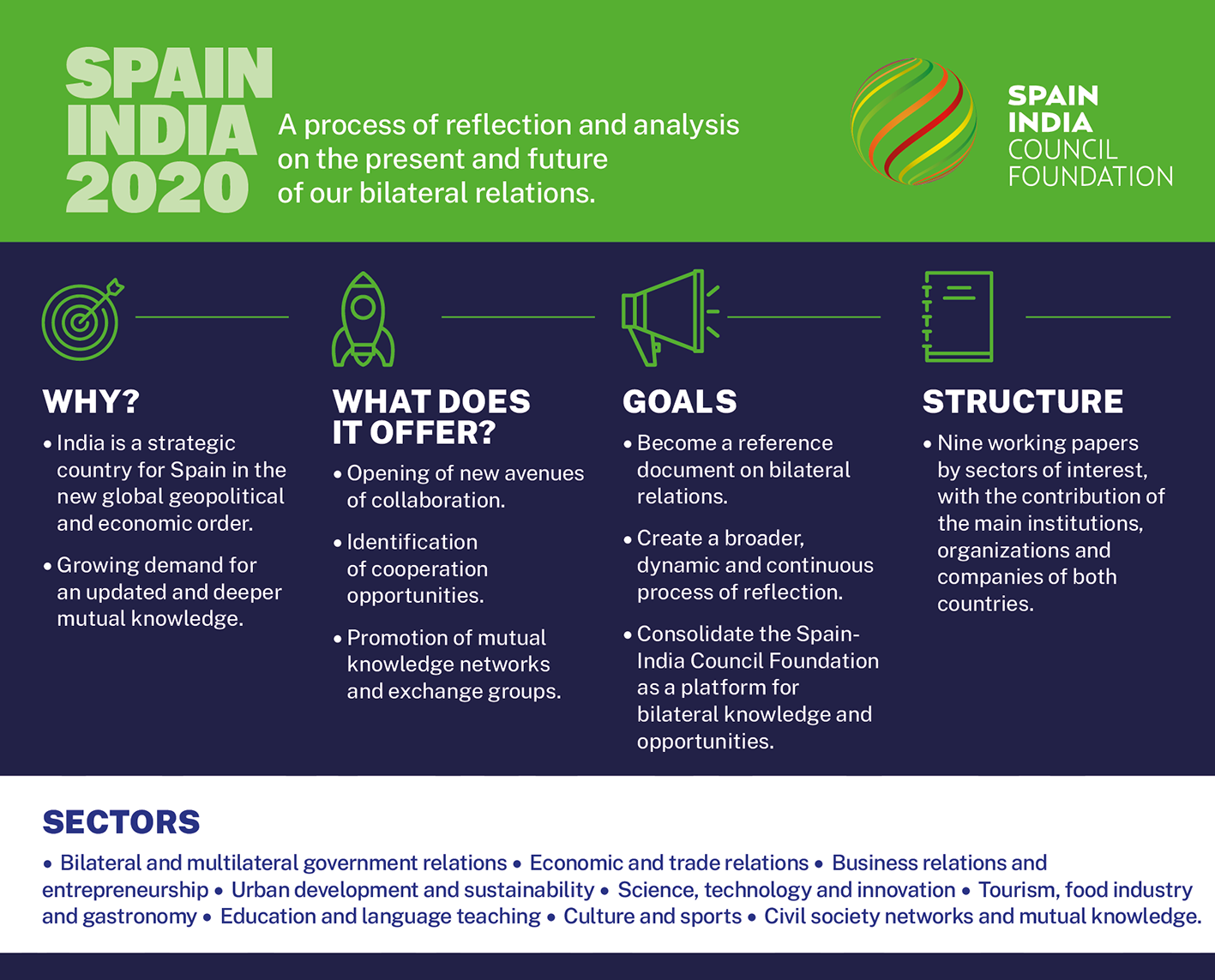